International Energy Agency: heat pump can meet 90% of the global heating demand, and its carbon emission is lower than that of gas furnace (Part 2)

The seasonal performance of heat pump has been steadily improved

It is common for the cop of heat pump to reach 4.5 or higher, especially in relatively mild climates such as the Mediterranean region and central and southern China. On the contrary, in extreme cold climates such as northern Canada, low outdoor temperature will reduce the energy performance of currently available technologies to an average of about 3-3.5 in winter.

Regulations, standards and labels, as well as technological advances, have driven global improvements. For example, after the minimum energy efficiency standard was raised twice, the average seasonal performance coefficient of heat pumps sold in the United States increased by 13% and 8% respectively in 2006 and 2015.

In addition to further improvements in the steam compression cycle (e.g. through next-generation components), if you want to increase the seasonal performance coefficient of the heat pump to 4.5-5.5 by 2030, you will need system oriented solutions (to optimize the energy use of the whole building) and the use of refrigerants with very low or zero global warming potential.

Compared with gas-fired condensing boilers, heat pumps can meet 90% of the global heating demand and have a lower carbon footprint.

Although electric heat pumps still account for no more than 5% of global building heating, they can provide more than 90% of global building heating in the long run and have lower carbon dioxide emissions. Even considering the upstream carbon intensity of electricity, heat pumps emit less carbon dioxide than condensing gas-fired boiler technology (usually operating at 92-95% efficiency).

Since 2010, relying on the continuous improvement of heat pump energy performance and clean power generation, the potential coverage of heat pump has been greatly improved by 50%!

Since 2015, the policy has accelerated the application of heat pump

In China, subsidies under the air pollution control action plan help to reduce the cost of early installation and equipment. In February 2017, the Ministry of environmental protection of China launched subsidies for air source heat pumps in various provinces of China (for example, RMB 24000-29000 per household in Beijing, Tianjin and Shanxi). Japan has a similar plan through its energy conservation plan.

Other plans are specifically for ground source heat pumps. In Beijing and throughout the United States, 30% of the initial investment cost is borne by the state. In order to help achieve the deployment goal of 700 million meters of ground source heat pump, China proposed supplementary subsidies (35 yuan / m to 70 yuan / M) for other fields, such as Jilin, Chongqing and Nanjing.

The United States requires products to indicate the seasonal performance coefficient of heating and the minimum energy efficiency standard of heat pump. This Performance-Based Incentive system can indirectly improve future performance by encouraging the combination of heat pump and photovoltaic in self use mode. Therefore, the heat pump will directly consume the green power produced locally and reduce the net power consumption of the public grid.

In addition to mandatory standards, the European space heating performance label uses the same scale of heat pump (at least Grade A +) and fossil fuel boiler (up to grade A), so that their performance can be directly compared.

In addition, in China and the EU, the energy used by heat pumps is classified as renewable thermal energy, so as to obtain other incentives, such as tax rebate.

Canada is considering the mandatory requirement of an efficiency factor greater than 1 (equivalent to 100% equipment efficiency) for the energy performance of all heating technologies in 2030, which will effectively prohibit all traditional coal-fired, oil-fired and gas-fired boilers.

In many markets, the potential savings in the installation cost of heat pumps relative to energy expenditure (for example, when switching from gas-fired boilers to electric pumps) usually mean that heat pumps may only be slightly cheaper in 10 to 12 years, even if they have higher energy performance.

Since 2015, subsidies have proved effective in offsetting the upfront costs of heat pumps, initiating market development and accelerating their application in new buildings. Canceling this financial support may greatly hinder the popularization of heat pumps, especially ground source heat pumps.

Refurbishment and replacement of heating equipment can also be part of a policy framework, as accelerated deployment in new buildings alone will not be enough to triple residential sales by 2030. The deployment of refurbishment packages involving the upgrading of building shell components and equipment will also reduce the installation cost of heat pump, which can account for about 30% of the total investment cost of air source heat pump and occupy 65-85% of the total investment cost of source pump.

The heat pump deployment should also predict the power system modifications required to meet the SDS. For example, the option of connecting to on-site solar photovoltaic panels and participating in demand response markets will make heat pumps more attractive. 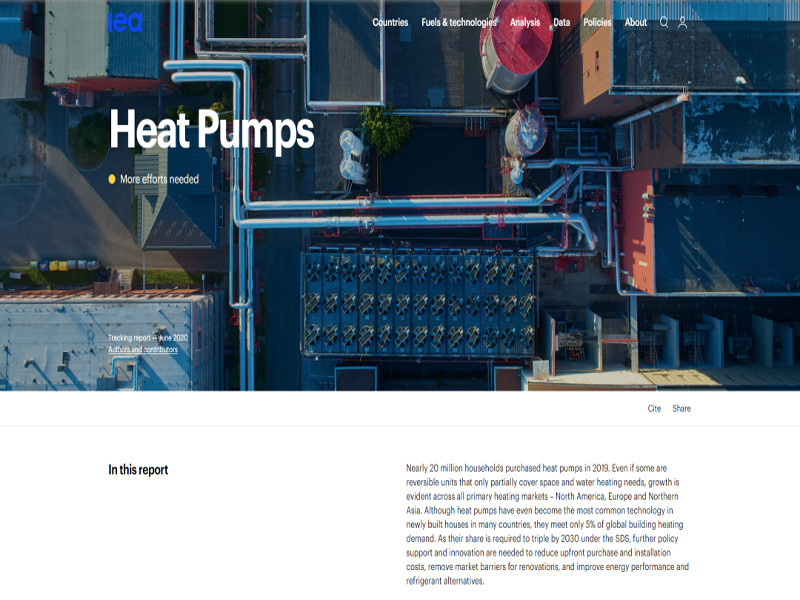