As you can imagine, your geothermal heat pump will always be effective and efficient at cooling your home, even in the hottest summers. Installing a geothermal air conditioner can reduce your electricity use by 25 to 50 percent! Taking advantage of geothermal cooling is a great way to avoid those painful spikes in your utilities bills over the upcoming hot summer months.

The greater the Energy Efficiency Ratio (EER), the more energy output you’re getting from your HVAC system compared to how much energy input it requires to run. An HVAC system with a EER of 3.4 is at the break-even point, where it produces as much energy as it requires. Geothermal AC systems typically have EERs between 15 and 25, while even the most efficient conventional AC systems only have EERs between 9 and 15!

The best part is, after several years, your geothermal system ends up paying for itself in savings! We call this time the “payback period”.

Geothermal is pure convenience compared to conventional HVAC. If you could simplify and reduce the number of bits and pieces required to achieve the same results, why wouldn’t you? In conventional HVAC, different appliances serve different functions. These various moving parts play their part depending on the season.
Perhaps you heat your home using a central furnace powered by natural gas, electricity, or even oil. Or maybe you have a boiler, which runs on natural gas, fuel, or oil. Maybe you use gas-fired or electric space heaters in addition to a wood-burning stove or fireplace.

Then, in the summer, none of this equipment is used and your attention turns to the central air conditioner with its various parts, both inside and outside. At a minimum, conventional heating and cooling require two distinctly different systems for different seasons.

A geothermal system is made up of only two parts: ground loops and a heat pump. This simple, straightforward, and convenient system can provide both heating and cooling, which saves you money, space, and so many headaches. Instead of installing, operating, and maintaining at least two separate pieces of HVAC equipment in your home, you could just have one that serves your home year-round.

Conventional central air conditioning systems typically last between 12 to 15 years. Often, the main components significantly degenerate within the first 5 to 10 years, causing a steady decline in efficiency. They also require more regular maintenance and are more likely to incur damage as the compressor is exposed to the elements.

A geothermal cooling system pump lasts well over 20 years, and the underground looping system lasts well over 50 years. They also require very little maintenance, if any, during that time. With no exposure to the elements, the parts that keep a geothermal system running last longer and maintain excellent efficiency during this time.

One reason for a geothermal system’s extended lifetime is its protection from the elements: the ground loops are buried deep underground and the heat pump is sheltered indoors. Both parts of the geothermal system are far less likely to suffer seasonal damages due to fluctuating temperatures and abrasive weather patterns such as snow and hail.

Conventional AC units have a reputation for being noisy, but it’s no secret why they’re as loud as they are. Conventional AC units are fighting a perpetual uphill battle against science by pumping indoor heat into the hot outdoors, and consuming massive amounts of energy in the process.

Geothermal AC systems are much quieter because they direct hot indoor air into the cool ground. Instead of worrying about overworking your AC, you can relax and enjoy the refreshing comfort of a quiet, cool home in the summer. 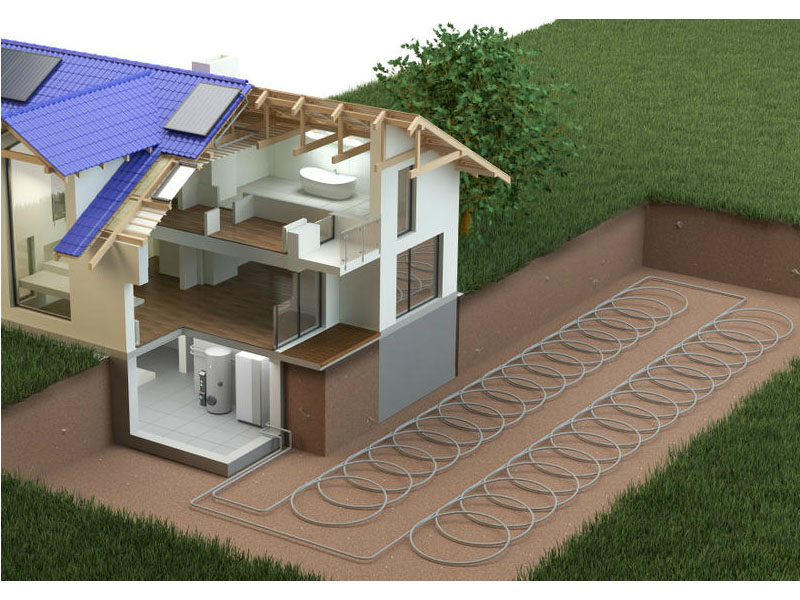